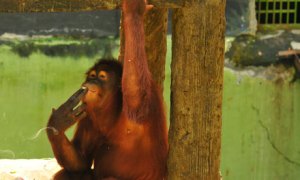 Sit back and have a smoke

An orangutan named Tori, currently a member of the Taru Jurug zoo in Solo, Indonesia has been a smoker for 10 years. She gestures for visitors to toss her cigarettes, and gets angry when they don’t.

Her partner, Didik, has resisted the habit so far. When people throw cigarettes into the cage, he stamps them out; but zookeepers fear he might succumb to temptation.

Tori’s parents were also smokers, as are many other orangutans living among humans.